The drugs in the list below are all prescription drugs. People need prescriptions to legally buy them. However, many people don’t get these drugs the intended way.

Instead, they buy the drugs from dealers or steal them from family members. Regardless of how they get the drugs, all of them have the potential for abuse. 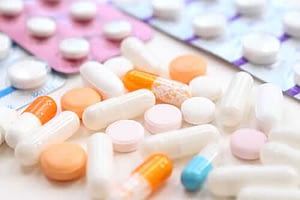 OxyContin is a popular drug for people to abuse. It’s a pain reliever that doctors prescribe to treat moderate to severe pain. People who abuse this drug often crush and snort the pills. OxyContin abuse is so bad that in 2010, pharmaceutical companies made a crush-resistant variation.

People abuse it mostly because they develop an addiction after they take prescriptions from their doctors. Others sell the drugs on the street because they can charge high prices. In some cases, they charge as much as $1 per milligram. For instance, one 80-milligram tablet goes for $80.

Xanax is a drug that has become really popular over the past few years. It’s a benzodiazepine that doctors use to treat anxiety. In high doses, it can cause blackouts.

People don’t usually abuse this drug alone. They mix it with alcohol, which doctors tell them not to do. The alcohol increases the effects of Xanax, which raises the risk of overdose and deadly side effects.

Vicodin is another painkiller to make the list. Once again, it treats moderate to severe pain. This drug came into fame after rappers started using it in their lyrics.

When Vicodin first hit the market, it was less harmful than OxyContin. Now, however, much stronger versions are available from dealers.

Oddly enough, Suboxone is a drug that helps treat opioid addiction. People who have OxyContin or heroin addiction use Suboxone to control cravings. Unfortunately, it can cause addiction as well. The drug is effective but only when people use it the right way.

Who knew that a drug to treat ADHD could cause addiction? Adderall is a stimulant that millions of people abuse. In fact, it’s a favorite drug among teens and young adults in college. They use it as a study aid because it keeps them alert and focused.