Going to parties is a great way to let loose and have a good time with friends. Unfortunately, some people think that they have to use drugs to take this experience to the next level. They may bring specific substances to parties, which they refer to as party drugs.

What Are Party Drugs? 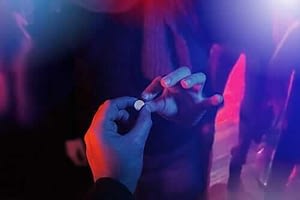 Party drugs is an umbrella term that describes substances that people use at house parties and clubs. Some people even refer to them as designer drugs.

The purpose of most of these drugs is to lower people’s inhibitions so that they have a good time. Most designer drugs make them talkative, outgoing, or more sexually active.

The Dangers of Designer Drugs

If people take drugs to have fun at a party, what’s the harm? Unfortunately, these substances come with a lot of risks.

Another risk is that people aren’t really sure of the potency. Dealers make these drugs in illegal laboratories with various chemicals that vary in strength. Sometimes, a dose is safe for one individual but causes an overdose in another. This serious problem can put a lot of people in the hospital.

People don’t always know what’s in the substance, either. They might think that they took one thing, but they actually took something different. Some people even slip date rape drugs to girls at parties but tell them that it’s something else. When sexual assault happens in this way, it’s common for women not to fully remember the incident.

People hand out many drugs at parties, but one of the most common is ecstasy. They enjoy taking it because it promotes empathy with others and produces a state of euphoria. It heightens their senses and makes the lights and music in the club more enjoyable too.

However, ecstasy has side effects such as dehydration, muscle cramps, and increased body temperature. In some cases, the body temperature increases so much that it becomes dangerous or fatal.

Meth is another popular drug that people take at parties. People enjoy it because it’s a stimulant that keeps them active and outgoing for long periods of time. Unfortunately, it’s extremely addictive and can cause long-term addiction. Abusing meth also causes several health issues, including stroke, heart attack, and death.

Let Us Help You Kick Your Drug Habit

Just because you struggle with drug addiction doesn’t mean that you can’t get help. At Crestview Recovery, we offer adult and young adult rehab programs in Oregon. Our goal is to help you overcome addiction. Some of our comprehensive programs include:

Don’t let your addiction keep you from living a good and happy life. Let us teach you more about the dangers of party drugs. You can reach out to us anytime at 866.262.0531.