Adderall is a stimulant drug, and alcohol is a depressant. While they’re very different substances, many users consume both at the same time or on the same day. This can be a problem since it’s unsafe to use Adderall and alcohol together. Explore the interactions between these substances, how addictions to either or both can develop, and how to overcome them with treatment.

Who is Mixing These Substances? 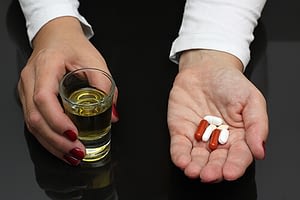 People of any age can struggle with substance abuse. Mixing alcohol and Adderall, however, is something most common among males under the age of 30. Many take Adderall along with alcohol to be able to stay up and party or drink longer. Others may take Adderall for medical reasons but ignore warnings to avoid alcohol while taking the prescription drug.

Whether a person has a prescription for Adderall or takes it recreationally, the drug can dull the effects of alcohol. If you normally start to feel drunk after two alcoholic beverages, it might take several before you feel the same effect when you’re using Adderall. While the typical symptoms of being drunk might be reduced or delayed, the body still has to process all that alcohol.

Sadly, many people who are taking Adderall and alcohol can suffer from alcohol poisoning. Some individuals don’t know that they’re at risk until it’s too late. The reverse can also happen, with recreational Adderall users taking too much under the influence of alcohol. This can lead to a drug overdose with disastrous side effects.

On its own, alcohol abuse can lead to behavioral symptoms. Adderall can do the same thing. Combine the two, and behavioral issues are incredibly likely.

After using alcohol and Adderall, most people have lower inhibitions. They may be more likely to get into a fight or engage in risky sexual activity. Violence and aggression are both more common among people who abuse alcohol and Adderall at the same time.

Using alcohol as well as Adderall can wreak havoc on the body. Adderall is a stimulant on its own, and drinking alcohol at the same time can increase the stimulant effects. That means the body temperature can increase rapidly, causing dehydration. It can also lead to increased blood pressure, a rapid heart rate or even an irregular heart rate.

Ending Adderall and Alcohol Addictions at the Same Time

Adderall and alcohol are both addictive. As a result, any client who mixes the two needs to address the use of both substances in rehab. At Crestview Recovery, programs can accommodate more than one addiction. Often, in fact, both addictions stem from the same causes, meaning treatment methods will naturally overlap. Some of the therapies that can address alcohol or Adderall abuse include:

Alcohol and Adderall addiction treatment can help you take back control over your life. At Crestview Recovery in Portland, Oregon, clients can expect quality care and comprehensive support. Call 866.262.0531 to learn more about your rehab options and to take the next step to better health.