When it comes to dangerous drugs, crack cocaine may be the most notorious. Heavy cocaine users turn to crack when they feel desperate, hopeless, and alone. People who are addicted can survive in deplorable conditions in order to escape into the oblivion of an intense, short-lived high. This central nervous system stimulant is responsible for destroying countless families worldwide. The absence of physical withdrawal symptoms, in many cases, makes it more difficult for people to put crack use behind them. Contact Crestview Recovery at 866.262.0531 to learn more.

What’s the Difference Between Cocaine and Crack Cocaine? 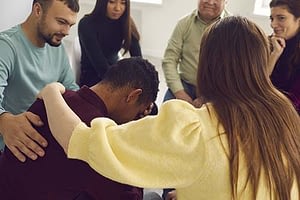 Before getting into the importance of finding a crack cocaine addiction treatment program, it’s important to learn more about this drug. The most important facts are the differences between cocaine and crack cocaine.

First, cocaine is a potent white powder that stimulates the central nervous system. People make it from the dry leaves of coca plants in South America. Most of the time, users snort the powder to get a quick and intense high.

Crack cocaine is a solid, rock-like form of the drug. To make it, people cook baking soda and cocaine together. This process creates crystals that break into small pieces or rocks.

Unlike cocaine powder, people have to smoke crack cocaine. In fact, this drug gets its name from the crackling sound that it makes as it heats up. Regardless of the form that people use, cocaine is a very addictive and dangerous drug.

Legal Use of Cocaine

There was a time when cocaine was legal to use. In 1891, for instance, The Coca-Cola Company used about 9 milligrams of the drug in its Coca-Cola soft drink. To put it into prescriptive, a line or typical dose of cocaine usually contains 50 to 75 milligrams.

Some psychologists even gave cocaine to their clients. The founder of psychoanalysis, Sigmund Freud, famously gave his clients the drug. He eventually stopped but kept taking the drug himself for several years.

By 1903, The Coca-Cola Company stopped using cocaine in its soda. The government officially made the drug illegal just three years later.

Why Entering a Crack Cocaine Addiction Rehab Program Is Important

In general, cocaine is extremely addictive and fairly easy for people to overdose on. If they don’t get drug addiction treatment at an early stage, there’s a chance that the drug could be fatal.

In fact, actor John Belushi had a cocaine problem for many years. His favorite game to play at parties was cocaine chicken. It involves snorting lines of cocaine as fast as possible. His addiction to cocaine led to his death at the early age of 33.

Crack Cocaine Addiction Is a Monster

For many years, people said that cocaine was nothing more than a rich people’s addiction. This reputation came about because so many actors had a problem with cocaine abuse.

Crack cocaine–also known as freebase–is cheaper than regular cocaine. However, smoking it is even more addictive than snorting it.

Get Help at Crestview Recovery

Are you or a member of your family looking for a crack cocaine addiction rehab program? You can get help at Crestview Recovery. We provide several rehab programs for substance addictions, including:

We offer a crack cocaine addiction rehab program for both men and women. We find that gender-specific treatment helps people recover more quickly. Beyond that, we create customized treatment plans for each client.

Don’t wait any longer to get help. Find a substance abuse treatment program to fit your needs at Crestview Recovery. Reach out to our friendly staff today at 866.262.0531 for more information.