For a while, ecstasy was receiving a lot of attention. However, in the past few years, the media seems to talk about it less and less. While not as addictive as other illegal drugs, ecstasy still has addictive properties. Below is more information about why it’s important to search for an ecstasy addiction rehab program. 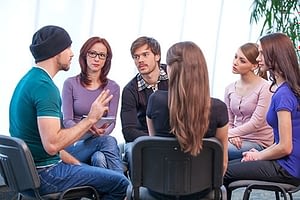 The official chemical name of ecstasy is 3, 4 methylenedioxymethamphetamine. Thankfully, people refer to it scientifically as MDMA. On the street, however, it has many names, including ecstasy, E, and X.

The drug itself belongs to the phenethylamines family of drugs. In the 1970s, MDMA had medical uses. In fact, many therapists believed that it was a good therapy drug. By 1985, however, the U.S. Drug Enforcement Administration put MDMA on the list of illicit drugs.

Some experts still experiment with MDMA. In fact, they believe that it still has the potential to help people with posttraumatic stress disorder. For the most part, however, MDMA is a dangerous illegal drug. Those who do this drug often end up needing an ecstasy addiction rehab program to improve their health.

Studies on the addictive nature of ecstasy differ. In general, however, most researchers agree that it’s addictive on some level. Since the drug isn’t as addictive as other illegal drugs, some experts downplay its addictive properties.

Either way, ecstasy alters the chemicals in the brain. These changes eventually lead to addiction. Some people even experience withdrawal when they stop using ecstasy, which is a clear sign of dependency. Although mild, some of the symptoms that they experience include:

In the grand scheme of things, ecstasy is a relatively new drug. Doctors still don’t know much about it or how to help people who suffer from addiction. With that said, they have success at treating MDMA addiction using traditional rehab services.

A good ecstasy addiction rehab program includes a step-down approach. To start with, people need to enroll in inpatient care. Professionals can monitor their progress and teach them coping skills. These skills are important for avoiding relapse.

After inpatient treatment, people move on to outpatient rehab. These programs provide more freedom with ongoing support. As part of an ecstasy addiction rehab program, outpatient care can prevent relapse and help people reintegrate into society.

The myths that surround ecstasy make it difficult to understand the drug. Lack of knowledge makes some people curious about it in the first place.

One myth is that it makes people so thirsty that they drink themselves to death. While ecstasy makes people thirsty, most people don’t drink water until they dilute their blood so much that they die. It’s true that ecstasy interferes with the body’s ability to regulate hydration. However, the chances of it leading to death as a result of drinking too much water are slim.

Another myth is that ecstasy is just a party drug. While it’s true that people use it while clubbing, others abuse it differently. For example, some people take ecstasy to deal with social anxiety. Unfortunately, doing that only covers up a larger problem.

Crestview Recovery Can Help You With MDMA Abuse

Are you in need of a good ecstasy addiction rehab program? If so, Crestview Recovery can help you. We can provide a customized treatment plan to support your efforts to overcome addiction. Some of the addiction programs that we offer include:

Crestview Recovery knows how important it is for rehab centers to offer dual diagnosis treatment programs. After all, mental disorders typically appear together, and addiction is a mental disorder. Some problems that accompany addiction include depression, anxiety and personality disorders.

Don’t waste any more time. Find out what it takes to overcome ecstasy addiction. Call Crestview Recovery at 866.262.0531 for more information.