What is Black Tar Heroin

Heroin is an incredibly addictive and dangerous drug. It comes in many varieties that people around the world use. One of the most worrying types of heroin is black tar heroin. Take a closer look at black tar heroin, why it’s so dangerous, its effects and how you can break free from a heroin addiction.

What is Black Tar Heroin? 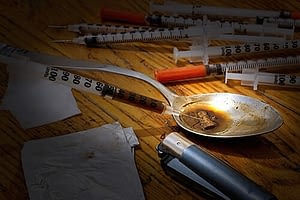 The most common form of heroin comes in powder form, which is usually either white or brown. However, it’s not the only kind of heroin that is available. Just as the name suggests, black tar is a dark and sticky substance. In fact, it often looks like black roofing tar.

Black tar, like all forms of heroin, comes from morphine. That makes it a powerful opioid drug. Individuals can smoke this type of heroin, but many inject it. This makes it extra dangerous to users.

Black tar is less refined than other forms of heroin. As a result, it’s also cheaper. Most people who use black tar already have a strong addiction to opiates.

The Side Effects of Black Tar

Using black tar heroin can have immediate negative effects. Users consume this drug because they want to experience the relaxation, euphoria or high that comes with the drug. However, the high isn’t the only symptom of black tar heroin.

Right away, heroin users can start to feel confused and disoriented. In a matter of minutes, other side effects can appear. These effects include nausea, diarrhea, itching and dry mouth.

Long-term use of black tar can cause further complications. This is especially true for those who inject it. Infections and abscesses are common, and in some cases, the flesh can start to decay around the injection site.

Using black tar heroin can rapidly result in a drug addiction. When users consume heroin, they flood their brains with chemicals that induce relaxation and happiness. However, those feelings don’t last.

Eventually, users will crave another dose of heroin for the same effects. Despite the many negative consequences, finding and using heroin will be their primary objective.

While black tar heroin is highly addictive, there are also underlying factors that can lead to the development of an addiction. Certain people may be more prone to addiction because of mental health issues, environment or even genetics.

To completely end an addiction to black tar heroin, professional support is key. At Crestview Recovery, clients get the treatment they need to end heroin abuse once and for all. Treatment programs are comprehensive and include all of the following:

To end a black tar heroin addiction, a 90 day addiction treatment center in Oregon could be ideal. Crestview Recovery in Portland might be the ideal solution for those who are ready to embrace sobriety. Find your custom route to recovery by calling 866.262.0531 today.