Binge drinking is a growing problem among teens, college students, and adults of all ages. But what, exactly, qualifies as binge drinking? Read on for the full binge drinking definition, how binge drinking can lead to addiction and how you or your loved one can overcome alcohol abuse issues.

What is Binge Drinking? 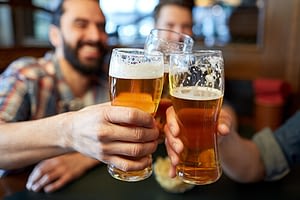 Binge drinking is heavy or excessive drinking. It’s also episodic, which means that drinkers consume lots of alcohol in a short amount of time. Although binge drinking is frowned upon, it’s still incredibly common.

The biggest reason that binge drinking remains popular is that alcohol is a legal substance. Most people recognize instantly that heavy drug use is a serious problem, but they might not feel the same way about heavy alcohol use. The majority of the adult population around the world consumes alcohol, and many of those individuals drink to excess.

The Binge Drinking Definition for Men and Women

One of the problems surrounding binge drinking is that many people feel their consumption is average or normal. That’s why it’s helpful to have a specific binge drinking definition that reveals exactly how much alcohol qualifies as excessive. For all people, binge drinking is present if their BAC, or blood alcohol concentration level, is 0.08 g/dL or higher.

How Binge Drinking Can Lead to Addiction

Binge drinking on five or more occasions within a month is considered alcohol abuse. While this isn’t necessarily a sign of alcoholism, it can definitely be a precursor to an alcohol addiction. Binge drinking requires the brain to deal with a flood of chemicals and hormones, and the body eventually starts to adjust to those large amounts.

Over time, this adjustment leads to a tolerance for alcohol. The brain establishes a new baseline, which might be a set number of drinks per day. If you try to cut back or even quit all at once, you may notice withdrawal symptoms. These symptoms are clear signs of an addiction to alcohol.

Whether a person is binge drinking, abusing alcohol or has an alcohol addiction, professional support can help. At Crestview Recovery, clients can learn how to overcome an addiction to alcohol. There are a number of therapies that can be beneficial in recovery, some of which include:

Understanding the exact binge drinking definition may reveal the scope of alcohol abuse or addiction. If you’re ready to find an Oregon alcohol rehab, consider Crestview Recovery in Portland. Call 866.262.0531 to learn more about how you can achieve sobriety through rehab.

What Are The Benefits Of Outpatient Treatment?
December 28, 2020