Is Heroin a Stimulant? 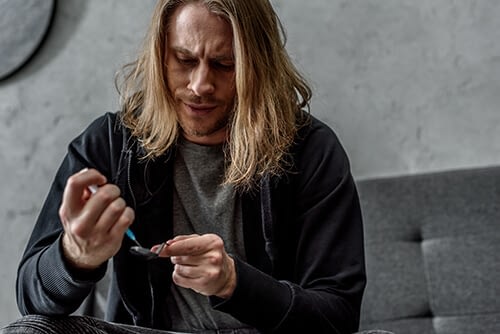 Heroin is an illegal recreational drug that is in the opioid class. It is a highly addictive substance made from opium poppy sap. Describing it does not answer the question “is heroin a stimulant?” What this does do is shed light on how the initial effects of wellbeing can turn into cravings and dependency.

Difference Between a Stimulant and a Depressant

Also helpful with understanding is knowing the difference between a stimulant and a depressant. Most addictive drugs fall under these two general classes. The names of both indicate how a person responds to the effects of each class.

A stimulant arouses the central nervous system. This category of drugs amplifies processes in the brain and body. Most stimulant drugs heighten dopamine release that increases a person’s alertness, attention, and energy.

Depressants have the opposite effect. These drugs slow down the central nervous system and all body parts that it controls. They can slow a person’s heart rate, breathing, and brain activity.

Is Heroin a Stimulant?

The short answer to “is heroin a stimulant” is no. Heroin is a depressant that slows down functions of the body controlled by the central nervous system. Heroin affects brain function and breathing to the point of slowing down or stopping both.

Body temperature and blood pressure can drop. A person’s heartbeat can become irregular. It is not uncommon for them to lose consciousness or even lapse into a coma. The person will need help from a heroin addiction treatment program to reverse its effects.

The degree to which heroin effects a person depends on different factors such as:

A person experiences a rush of pleasurable feelings when taking heroin. Seeking relief from physical pain turns into some not-so-pleasant physical symptoms. They may feel sick and start vomiting. Loss of sex drive and narrowing of pupils may also occur.

Repeated use of heroin changes the physiological and physical structure of a person’s brain. Some changes become irreversible over long-term use. Coupled with these changes are the risks of building a tolerance and dependence.

The True Dangers of Depressants

When you find out the answer to is heroin a stimulant, it’s important to understand that it’s still just as dangerous as other substances. Depressant drugs like heroin pose a threat for overdose. Heroin is dangerous on its own. It becomes more problematic when mixed with other drugs to intensify its euphoric effects. This is because it is a huge risk slowing down the central nervous system.

Doing this can lead to an overdose where the person’s breathing slows. Overdosing on depressants prevents oxygen from reaching vital organs like the brain. In a short period of time, a person can suffer brain damage, fall into a coma, or even die.

Finding out is heroin a stimulant is only part of overcoming an addiction. Getting help is just as critical. Crestview Recovery offers effective evidence-based treatment methods to ensure you receive the best care for your addiction.

At last, put an end to your addiction today by calling our facility at 866.262.0531. We will guide you toward the path of recovery, so call now.