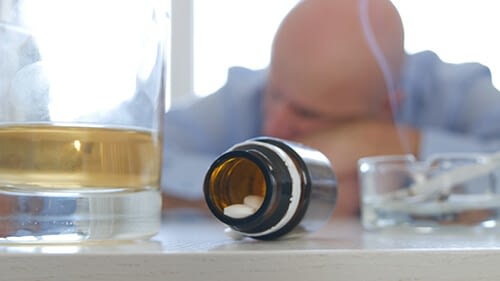 Who Mixes Alcohol and Adderall?

Adderall is a stimulant that students commonly use to stay awake or focus on studying. College students, more than high school students, also use Adderall with alcohol to drink longer when they party. Their reasoning is that taking Adderall before a night of drinking alcohol would keep them partying all night. But you wouldn’t know how much you’re drinking because Adderall holds off the drunken effect, causing you to drink more. The newest party drug could lead to alcohol poisoning and maybe death.

Effects of Mixing Adderall With Alcohol

When mixed, Adderall and alcohol can not only cause death by alcohol poisoning, it can also cause death by arrhythmia. Adderall is an amphetamine used by people with ADHD. When people who don’t have ADHD take it and add alcohol, it causes the heart to beat out of rhythm. This is arrhythmia; it’s very dangerous, and it can be fatal.

Other side effects of mixing alcohol and Adderall include:

If you’ve made it a habit of using these substances together, you not only have an addiction, but you’re also risking your life. Don’t try putting an end to these two serious addictions yourself. Stop these two addictions at one time with the alcohol rehab program and the Adderall addiction treatment program at Crestview Recovery.

Ending the Two Addictions at the Same Time

Clients can go to Crestview Recovery to deal with more than one addiction. Their programs can focus on multiple addictions at a time because addictions often arise from the same problems. Treatment programs overlap each other to cover all issues. Treatments that focus on alcohol and Adderall abuse include:

Set in the Pacific Northwest, people from Oregon, Washington, Idaho, Montana, and California come for treatment offered by Crestview Recovery. They use snowboarding, white water rafting, and skiing as a valuable part of their successful therapy. This Portland, Oregon rehab center has treatments for men and women over the age of 18. Most health insurance plans will cover the cost of treatment for the patient.